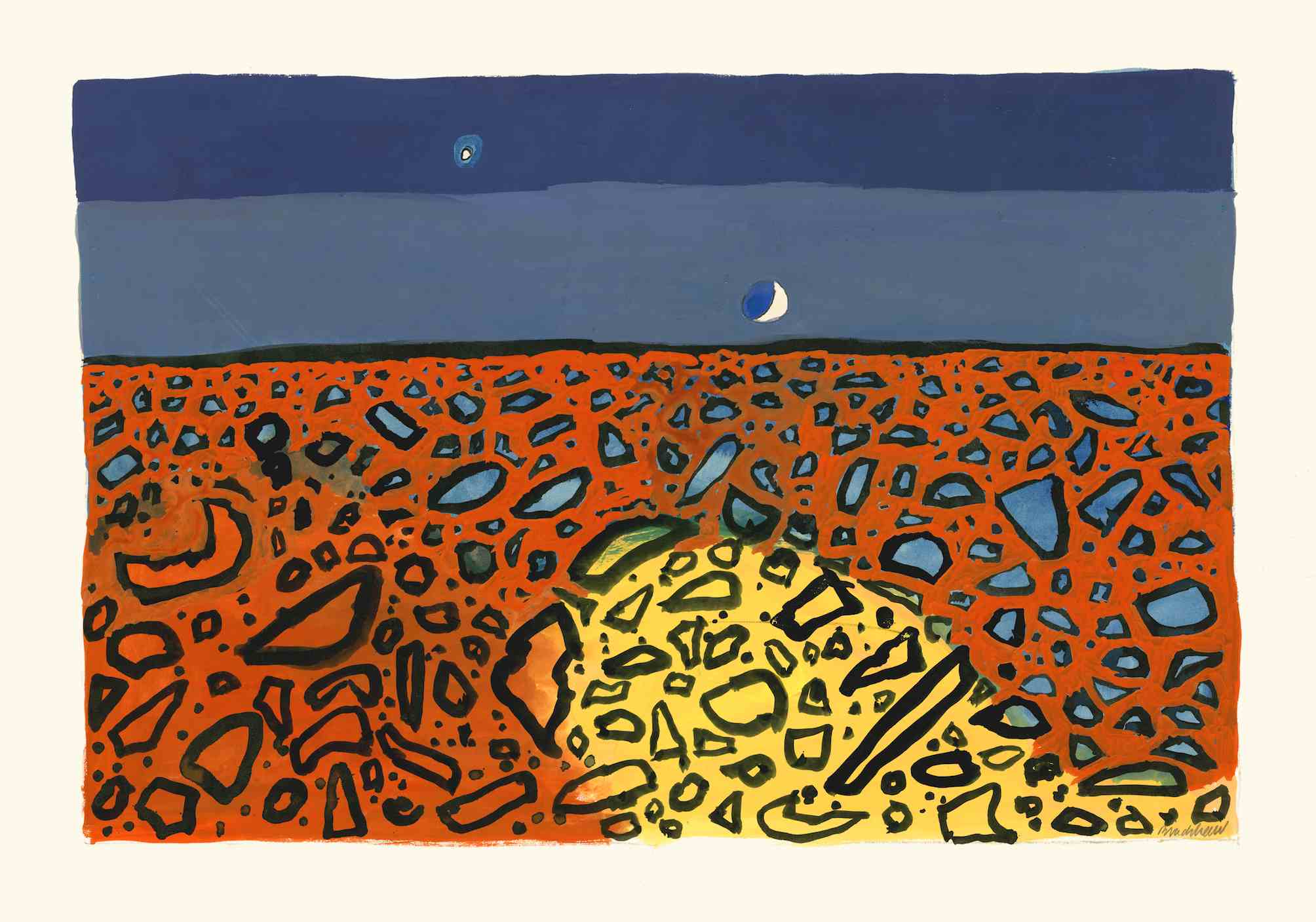 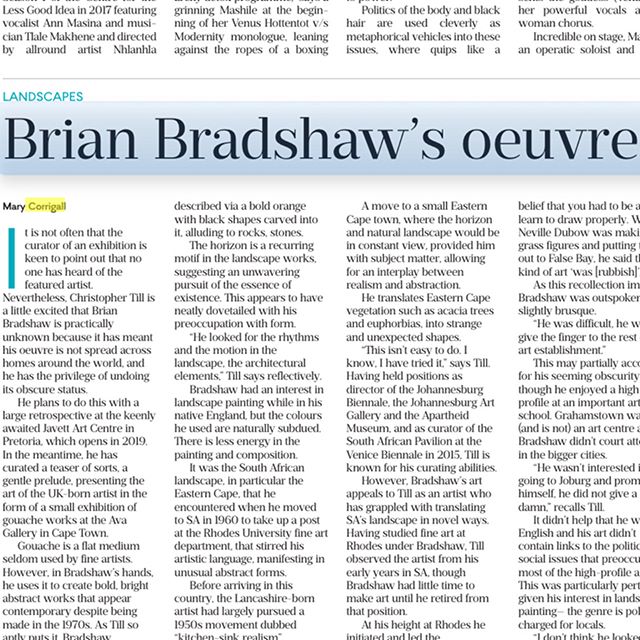 It isn’t often that the curator of an exhibition is keen to point out no one has heard of the featured artist. Nevertheless, like many art historians and curators, Christopher Till is a little excited that Brian Bradshaw is practically unknown because it has meant that his oeuvre is not spread across homes, museums collections, around the world and he has the privilege of undoing its obscure status. He plans to do this with a large retrospective at the highly anticipated Javett Art Centre in Pretoria, which opens in 2019. In the meantime he has curated a teaser of sorts, a gentle prelude, presenting the art of the British-born artist, in the form of small exhibition of gouache works at the AVA gallery in Cape Town.

Gouache is a flat medium – hardly used by fine artists. However, in Bradshaw’s hands he uses it to create bold, bright abstract works that appear contemporary despite being made in the 1970s. As Till so aptly puts it, Bradshaw “energises skies, clouds.” In Desert Moon for example Bradshaw divides an evening landscape into three bars of colour – the earth is described via bold orange with black shapes carved into it, alluding to rocks, stones.

The horizon is a recurring motif in the landscape works, suggesting an unwavering pursuit of the essence of existence. This appears to have neatly dovetailed with his preoccupation with form.

“He looked for the rhythms, the motion in the landscape, the architectural elements of it,” observes Till.

Bradshaw had an interest in landscape painting while in his native England, but the colours he used in describing it are naturally subdued. There is less energy in the painting and composition. It was the South African landscape, in particular the Eastern Cape one, that he encountered when he moved to South Africa in 1960 to take up a post at the Rhodes Fine Art Department, that stirred his artistic language, manifesting in unusual abstract forms.

Before arriving in this country, the Lancashire-born artist had largely pursued a ‘50s movement dubbed “kitchen-sink realism”, according to Till. It was quickly torpedoed by abstract expressionism, leaving the likes of Bradshaw at an awkward artistic juncture. A move to a small Eastern Cape Town, where the horizon and natural landscape would be in constant view provided him with subject-matter allowing for an interplay between realism and abstraction.

He translates Eastern Cape vegetation such as acacia trees, euphorbias, into strange and unexpected, shapes.

“This isn’t easy to do. I know I have tried it,” says Till. Having held positions as director of the Joburg Biennale, the Joburg Art Gallery, the Apartheid Museum and more recently as the curator of the SA Pavillion at the Venice Biennale in 2015, Till is known for his curating abilities. However, Bradshaw’s art appeals to him as an artist, who has grappled with translating the South African landscape in novel ways. Having studied fine art at Rhodes under Bradshaw, he observed the artist from his early years in South Africa, though Bradshaw had little time to make art until he retired from that position.

During his height at Rhodes he initiated and led the ‘Grahamstown group’ – a circle of artists united by their commitment to classical art training.

“He really engendered a belief that you had to be able to learn to draw properly. When Neville Dubow was making grass figures and putting them out to False Bay he said that kind of art ‘was crap’.”

As this recollection implies Bradshaw was outspoken and slightly brusque.

“He was difficult, he would give the finger to the rest of the art establishment.”

This may partially account for his seeming obscurity, though he enjoyed a high profile at an important art school. Grahamstown wasn’t (and isn’t) an art centre and Bradshaw didn’t court attention in the bigger cities.

“He wasn’t interested in going to Joburg and promoting himself, he did not give a damn,” recalls Till.

It didn’t help matters that he was English and his art didn’t contain any links to the political and social issues that preoccupied most of the high profile artists from the ‘70s to the late ‘90s. This was particularly pertinent given his interest in landscape painting – the genre is politically charged for locals.

“I don’ think he looked beyond the spiritual physicality of the landscape. He was interested in the volcanic moment of the creation rather than the human steps one sees. Force, creation, energy mass and how it rises up and joins with the sky is what interested him,” says Till.

Charismatic, opinionated and defiant, Bradshaw was hard to forget. Till thought of him often and on a tip off from a friend visited him towards the end of his life in Heidelberg, where he had settled after leaving Grahamstown. It was here that Till discovered and was astonished by the quality and breadth of his work. When Bradshaw subsequently returned to the UK, Till packed up Bradshaw’s studio, gathering all his writings, diaries, etchings, early and late paintings with a view to staging a proper retrospective.

“I know his work. He has a particular way of representing the SA landscape that is largely unacknowledged. In the retrospective I will piece it together and reveal what a powerful painter he was.”

The gouache works at the AVA gallery form an introduction to the retrospective. If he was able to create this kind of visual drama through this flat medium what might have done with oils? But, of course, the larger question is whether his art will finally find an audience. His legacy is probably in safe hands given Till’s clout as a curator, director. Till embodies his legacy too; he evinces an unwavering admiration for his former lecturer who instilled something in him that has obviously never been extinguished.

Who are the weakest links in the art ecosystem chain?

How online art fairs are changing the art market